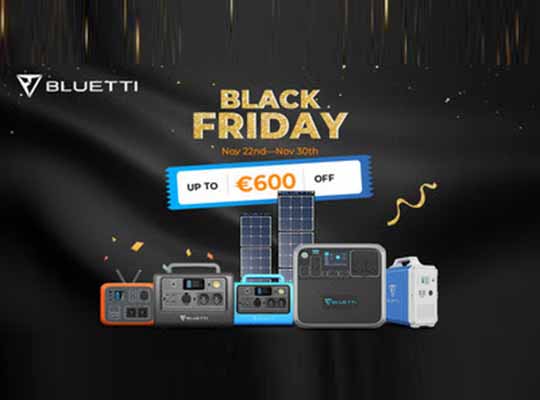 MUNICH – For this Black Friday, pioneers in off-grid power solutions, BLUETTI, take the lead in offering big discounts across the range.

When camping, hiking, or full-time off-the-grid living such as vanlife, the last thing you want is to lose power in the middle of nowhere. In our modern lives, having a sufficient supply of energy to power all of your needs is critical. As a result, there are now many different portable power stations and solar panel brands on the market. Portable power stations consist of a series of huge batteries designed to power phones, laptops, TVs, and even whole campsites.

BLUETTI EB150 is an all-in-one solar generator that has been well-loved for almost two years. Featuring a 1000Watt pure sine wave inverter, the generator is capable of powering most home appliances outdoors. The 1,500Wh battery capacity ensures consumers need not worry about power supply when outdoors. BLUETTI EB150 also supports up to 500watt MPPT solar input, which in good sunlight, can achieve max capacity in as little as 4.5 hours. BLUETTI has been working on efficient, safe, and easy-to-use solar charging technologies, and the EB150 is clearly a leader. Now, BLUETTI is offering an all-time low price for this classic model during this Black Friday Sale.

BLUETTI EB240 – The Power You Can Count On During An Outage

The BLUETTI EB240 looks identical to the smaller EB150 but with a 60% larger battery capacity. Containing an enormous 2400Wh battery pack and specially designed low-temperature resistant cells, the EB240 can run an electric heater at -20℃ to keep anyone warm and cozy in winter.

Finally, after recording great sales numbers in the United States for almost six months, the newest BLUETTI EB series editions are now available in Europe. EB70 features 1000W power inverters and a 716Wh LiFePO4 battery pack which is impressive for its size. The EB55 features a 700W inverter and holds a 537Wh LiFePO4 battery pack.

Bluetti also offers another compact model called the AC50S, which is a 300W power station with a 500Wh lithium-ion battery pack. The Bluetti EB55 and EB70 are two completely different products serving different purposes within the compact power stations segment.

Last but not least, the one and only AC200P. Featuring a 2000 watt pure sine wave AC inverter with up to 13 outlets and 12V 25A DC output, the BLUETTI AC200P has proven to be one of the world’s most popular portable power stations over the past year. Packed with an ultra-durable LiFePO4 battery pack and a total capacity of 2000Wh, the unit offers over 3500 charge cycles before capacity degrades to 80%. This works out to almost 10 years of service if used one cycle per day. Aside from a 500W adapter that comes in the box, the AC200P can also be charged with clean, safe, and free sunshine. The AC200P supports up to 700W of solar input and can be filled in as short as 4 hours by solar alone.

For this Black Friday Sale, BLUETTI will knock a limited €300 off the price of the AC200P and a huge €600 discount for the AC200P and three SP120 solar panel bundles!

BLUETTI’s Black Friday 2021 For Europe starts at GMT 10:00 am on November 22nd and will end at the same time on November 30th. This is a limited one-week sale and not to be missed out on!

LONGi Achieves Another Milestone as the Ist Solar Brand to exceed 20 GW in...