Home Editor's Pick Article Renewable Energy – One Step Closer in the March towards a Clean... 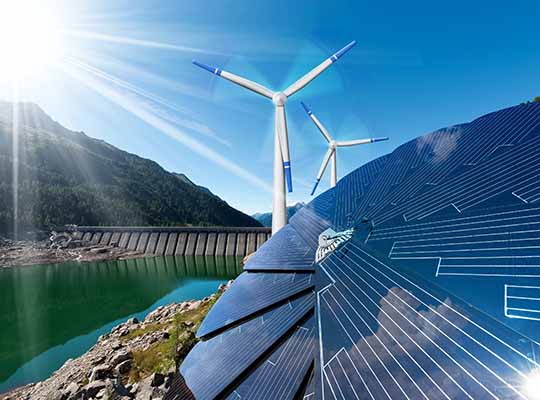 With increasing need for a clean energy future, focus on the use of renewable resources as alternatives to fossil fuels in power and energy sector to minimize carbon emissions and overall pollution has boosted drastically. Renewable power sector is booming with rapid innovations and development of cost-effective methods and techniques to capture and retain wind and solar energy.

Renewable energy, often known as clean energy, is energy obtained from sources that naturally replenish but are flow-limited. Such resources include biomass, sunlight, wind, water, and geothermal heat. While none of these sources – when used alone – can meet the global electricity need, they can completely replace fossil fuels and reduce costs of electricity generation when combined together. Renewable energy sources and technologies have the potential to provide solutions to long-term energy problems that the developing and underdeveloped countries have been facing over the last couple of decades. The depletion of natural resources and growing demand for conventional energy has forced power and energy companies and urban planners to scout for alternative sources such as renewable energy – that also offers a viable alternative to drastically reduce carbon emissions, minimize pollution, and improve sustainability of our civilization.

Bioenergy sources include biomass and biofuels that are extensively used in the production of electricity, thermal energy, and fuels used in transportation. Bioenergy – produced from organic matter – is one of the most diverse resources available that can help cater to the global demand for energy. Bioenergy can offer energy systems that are renewable with low-carbon content with numerous benefits for the environment and socioeconomic landscape. Bioenergy has been assigned a key role in various ambitious mitigation targets in numerous climate models. Bioenergy is expected to sustainably offer a quarter and third of the primary energy supply by 2050.

A wide range of conversion technologies are under development with enhanced output, low costs, and improved environment sustainability and protection. Bioenergy is considered to be the chief source of renewable energy that can completely substitute fossil fuels across all energy sectors. Recently, in August 2021, the U.S. Department of Energy announced a US$34 million funding for 11 projects to support high-end research and development activities to boost and manufacture biofuels, biopower, and bioproducts to lower carbon footprint of the transportation sector and meet the  Biden-Harris Administration’s goal of net-zero emission by 2050.

Solar energy is produced by capturing radiant energy from sunlight and converting it to heat, electricity, and hot water. Since sunlight is functionally endless, there is limitless supply of solar energy. Increasing reliance on solar energy has proven to be beneficial for human health and overall environment. Over the period of time, solar energy could drastically reduce energy costs and bills, play a significant role in developing resilient electrical grid, contribute to economic growth, and operate at a robust efficiency on smaller and larger scales.

Hydropower or hydroenergy primarily uses water stored in dams or from rivers to generate electricity and power. Hydropower facilities are largely powered by kinetic energy of flowing water and utilizes turbines and generators to convert that energy into electricity. This electricity is then supplied to electrical grid to power homes, businesses, and industrial sectors. Hydropower is the most widely used renewable source of energy and contributed to 17% of the energy produced on a global scale.

Wind is a clean, free, and readily available renewable source of energy with wind turbines capturing the power of wind and converting it to electricity. Wind turbines have the potential to reduce dependency on fossil fuels for electricity generation, resulting in lower air pollution and reduced carbon emissions. Across the globe, countries and power & energy companies are focusing on extensive R&D activities to develop solutions to reduce the levelized cost of energy of both offshore and inshore wind power. A major benefit of wind energy is its ability to combat harmful side effects of climate change and so focus on harnessing this source of energy has tremendously increased over the recent past. For instance, Siemens Energy is piloting a project that aims to combine offshore wind turbines with electrolyzers to directly convert electricity into hydrogen.

Geothermal energy is derived from the sub-surface of the earth and is form of energy conversion that capture heat energy from within the earth for electrical power generation, space heating, and other uses. Geothermal power plants can produce electricity constantly regardless of weather conditions and have small footprint as compared to other energy sources. Geothermal power is a viable source of renewable energy for generation of power and heating and is expected to cater to nearly 5% of the global energy demand over the next two decades.

The Future of Renewable Energy

Replacing conventional energy sources with renewable ones has become one of the most promising ways to sustain the environment and progress towards a future of clean energy. The advent of renewable energy has disrupted the global energy market with new and new technologies being developed to help countries and companies accelerate their process of de-carbonizing. Disruptive trends such as renewables-based electrification of industry, buildings, and transport is set to help the world reduce its dependency on fossil fuels and reduce carbon emissions by nearly 90% by the end of 2050. With increasing focus on making renewable energy affordable, efforts have been put into distributed generation by enhancing reliability of grid and improving viability of small-scale renewable energy resources. Rapid advancements in the Power-to-X technology, the shift to renewables is expected to accelerate at an unprecedented rate and will play a crucial role in mitigating challenges associated with long-term energy storage. The future of the renewable energy market looks cleaner and sustainable with a robust security of energy.

Frost & Sullivan Forecasts Solar PVs A Total Of $2 Billion To Be Invested...