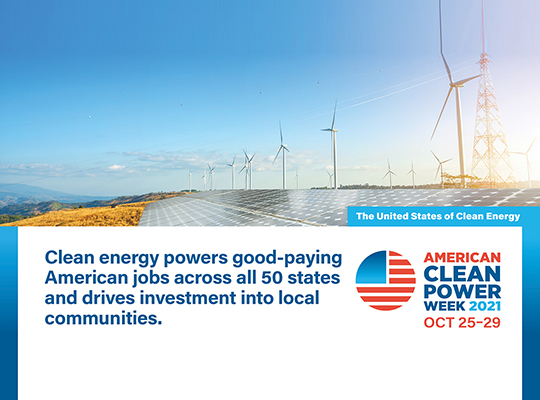 WASHINGTON – The American Clean Power Association kicked off its inaugural American Clean Power Week, an entire week dedicated to celebrating the ways clean energy is building a better future for the United States. The theme for the week is the United States of Clean Energy, highlighting clean energy technologies through numerous live and virtual events with public officials, industry leaders and the public across the country.

Land-based wind, offshore wind, solar, transmission and energy storage are all key climate solutions that will help meet our national 100 percent carbon free power goals by 2035 while providing job opportunities to Americans across the country.

The clean energy industry employs 415,000 Americans and has invested more than $334 billion in the U.S. economy since 2005. Industry momentum combined with supportive policies and regulations could deliver over one million clean energy jobs by 2030.

ACP kicked off the week with findings in a new national survey commissioned by the Clean Power Institute, conducted by the bipartisan polling team of Public Opinion Strategies and Hart Research, which finds strong support for clean energy and recognition of its benefits. Among the key findings:

Clean power projects generate renewable energy in all 50 states with more on the way as our nation drives toward its decarbonization goals.

There are over 180,000 MW of clean power capacity operating in the U.S. more than double the capacity five years ago with more on the way. That is enough to power over 52 million homes.

Tuesday, October 26: Solar Power: Solar power is a key climate solution that can help meet our nation’s 100 percent carbon-free power goal by 2035. Solar power is one of the most affordable sources of new electricity across the nation. Solar costs have fallen over 90% over the last decade.

Thermoelectric Generator Market worth $635 million by 2026