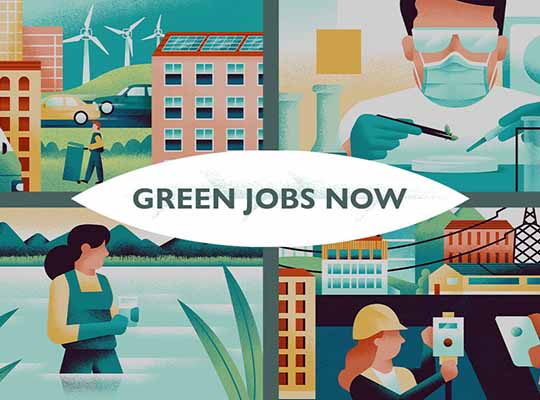 LOS ANGELES — WorkingNation, a nonprofit news organization reporting on the future of work, announced the start of Green Jobs Now, a data-driven journalism project to define and identify green jobs within individual states, to discuss the skills needed for such jobs, and to pinpoint where workers can find them.

Nearly 9 million current jobs are generated by the U.S. green economy, accounting for 6% of all U.S. jobs – and those numbers will grow to 24 million jobs and 14% by 2030, according to an analysis by Management Information Services, Inc. (MISI), one of two research firms partnered with WorkingNation to produce original data for the project. The other, Emsi Burning Glass, generated localized data for the states covered in the project’s initial phase – Pennsylvania, Louisiana, Colorado, Connecticut, Arkansas, Illinois, Mississippi, Iowa, and Indiana.

In communities across the country, if you’ve seen solar panels on a roof, a wind farm in a field, a hydroelectric dam, or a sustainability division within your company, you already know the local green economy is humming with jobs and opportunities. And now that the federal government has passed its $1.2 trillion infrastructure bill packed with sustainability initiatives, it may be about to roar.

“Green jobs are central to local economies and becoming more important as Americans build out local green infrastructure,” said Art Bilger, founder and CEO of WorkingNation. “WorkingNation is focused on the future of work and potential skills gaps between workers and jobs, and green jobs are an intersection point for those priorities. Let’s ensure our workforce is adequately trained so everyone has a great job with purpose as America grows greener.”

As part of the series, WorkingNation will release reports from MISI and Emsi Burning Glass containing their national and state data, as well as consumer-friendly journalism articles on WorkingNation.org, a podcast called “Work Green, Earn Green,” and videos in WorkingNation’s “I Want That Job!” series.

The Green Jobs Now project kicked off today with an overview article at WorkingNation.org. WorkingNation and partner organizations also will lead a special Twitter chat today from 1 to 2 p.m. ET at the hashtag #GreenJobsNow. The first installment of “Work Green Earn Green” will discuss what defines a “green job” and be released Friday. A MISI white paper drawn from the national data will follow Jan. 21, and reports on the first state in the series, Pennsylvania, will begin Jan. 28.

Green Jobs Now is supported through grants from the Walton Family Foundation and other organizations. WorkingNation is seeking additional grants for reports on additional states. Interested parties may contact Joan Lynch, WorkingNation’s chief content and programming officer, at joanlynch@workingnation.com.