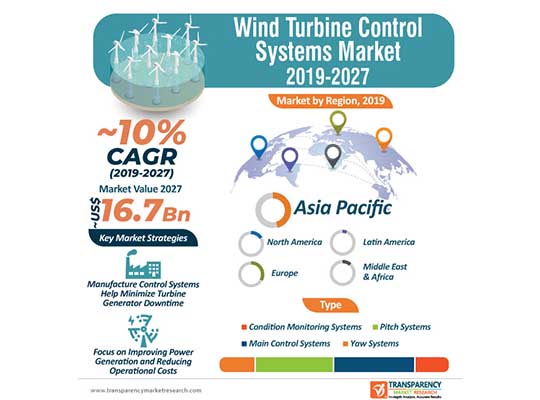 Increased awareness about green energy coupled with stringent government rules and regulations about emissions of greenhouse gases (GHGs) and carbon are compelling companies to find out more effective and pollution-free energy generation methods. Wind energy is a prominent alternative for the energy generated from fossil fuels. The process of energy generation from fossil fuels emits greenhouse gases (GHGs), which can cause serious damage to the environment such as global warming, air pollution, and land pollution. Over the last 5 years, the world has witnessed around 60% rise in the wind energy production. In 2014, the wind energy produced stood at around 370 Giga-watts and, in 2018, it stood at around 591 Giga-watts. Furthermore, the demand for wind turbine control systems is directly linked to the demand of wind turbines, as this system needs to be installed in every wind turbine. Thus, increasing awareness about green energy and stringent government rules and regulations are key driving factors for the global wind turbine control systems market

In January 2020, GE, EDF, and ESB Renewables were awarded a multimillion dollar project for offshore wind farm project. The deal brings together collaborative expertise to flexibly deliver significant efficiencies to EDF Renewables and ESB. The project would help deliver low-carbon energy to 375,000 homes in Scotland, the U.K.

In June 2019, Mita-Teknik announced the launch of a new-generation blade pitch system for use in onshore and offshore wind turbines. The Mita Pitch System is a flexible pitch solution for use in turbines of up to 12 MW, which boasts design life of 30 years. The new system is designed to effectively minimize O&M costs, reduce downtime, and improve productivity.

SunPower Elected to Executive Committee of SEIA Board Suzanne Leta