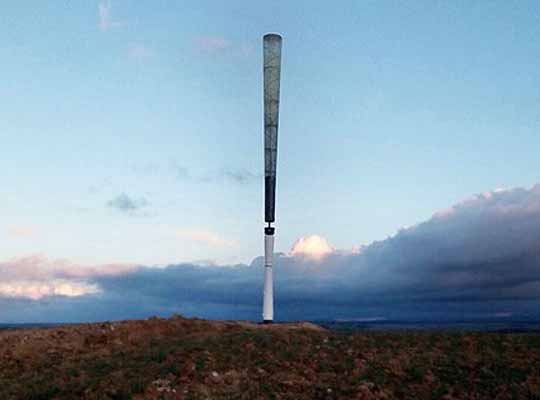 Wind energy has been an integral source of renewable energy for mankind to support his/her various energy related activities from time immortal. To meet the growing energy demand of people with sustainable environmental energy generation, wind energy utilization plays an important role and this technology has already made deep inroads into practical electric energy generation with improved efficiency and advantages but is still under the shadow of some limitations. Wind energy has already become an essential part of the global renewable energy landscape and in the foreseeable future, the dependence on it is anticipated to increase. Wind turbines at present are the most commonly used machines to convert wind energy into electrical energy with the movement of the blades fuelling an electricity generator.

At present, we can see a number of wind farms playing a great role in electricity generation.  The wind turbines in use at present have been developed to convert wind energy into electricity with a concept of application of blades which rotate due to the force exerted by wind and then converting the rotational mechanical energy into electricity.  Wind turbines with blades have their own advantages and disadvantages. Instead of deliberating on the advantages, it is important to highlight the disadvantages being associated with the use of blade technology.  Instead of horizontal (HAWT) and vertical (VAWT) models of wind turbines blades, issues associated with blades section of the wind turbines like transportation problem, need of stronger construction to support blades, mechanical wear and tear of blades, lower rotation efficiency and the noise pollution due the rotation of blades are few to mention which are forcing innovators/engineers to look positively for bladeless wind turbines.

The concept of bladeless wind turbines being even less efficient in the conversion of captured wind power into electrical energy as compared to their counter parts (i.e., wind turbines with blades) is gaining acceptance for converting the wind energy into electricity. Bladeless wind turbine with centripetal flow was patented by Nikola Tesla in 1913. Bladeless technology basically consists of a cylinder fixed vertically with an elastic rod.  The outer cylinder is designed to be largely rigid and the cylinder oscillates remaining anchored to the bottom rod on a wind range generating electricity through an alternator system. The top of the cylinder is unconstrained and has the maximum amplitude of the oscillation. The structure of bladeless turbine is built by using resins reinforced with carbon and/or glass fiber which are the materials used in conventional wind turbine blades. The rod’s top supports the mast and its bottom is firmly anchored to the ground. It is built of carbon fibre reinforced polymer, which provides a great fatigue resistance and it has a minimal energy leak when oscillating.

Bladeless wind turbines are designed in such a way that they stand erect and oscillate in response to the vortices. Vortex bladeless is a vortex induced vibration resonant wind generator and harnesses wind energy from a phenomenon of vorticity called Vortex shedding. In fluid mechanics, as the wind passes through a blunt body, the flow is modified and generates a cyclical pattern of vortices. Once the frequency of these forces is close enough to body’s structural frequency, the body starts to oscillate and enters into resonance with the wind known as Vortex Induced Vibration (VIV). Vortex’s pole geometry is specially designed to achieve maximum performance to the average observed wind velocities. It is able to adapt very quickly to wind direction changes and turbulent airflows commonly observed in urban environments.

The idea behind Vortex wind turbine is the possibility that same forces can be exploited to produce energy. Currently, Vortex generates electricity through an alternator system, made by coils and magnets, adapted to the vortex dynamics, without gears, shafts or any rotating parts. This design allows to reduce maintenance and eliminates the need for greasing. The frequency of the Vortex shedding is proportional to the wind stream’s velocity; however, each structure has its own natural vibration frequency. To match wind frequencies with a device’s natural frequency you should modify the body mass (the more mass the less natural frequency) and the rigidity (the more rigidity, higher frequencies), among other parameters. When the wind vortices match the natural frequency of the device’s structure it begins resonating, hence oscillating, so the bladeless wind turbine can harness energy from that movement as a regular generator. The main materials used for the manufacturing of Vortex turbines are carbon fiber polymers, plastics, steel, neodymium and copper and the working limits of these materials are far away from Vortex’s operational standards. Bladeless wind turbines completely eliminate mechanical elements that can suffer wear and tear by friction. Further, with the recent innovation of bladeless wind turbines, the risk of structural damage to the system can be reduced significantly.  Moreover, the reduced weight of bladeless turbines is acting as a primary driver of the global bladeless wind turbines market.

At present, the global bladeless wind turbine market is being propelled by the single handed efforts of a Spanish company known as “Vortex Bladeless”, which has innovated the current design of bladeless turbines. With intensive ongoing research and product enhancements in the field, more companies are expected to enter the lucrative market of renewable energy utilization. On the basis of region, the global bladeless wind turbines market can be categorized into sections of Western Europe, Eastern Europe, Asia Pacific, Latin America, North America, and the Middle East and Africa. The adoption of bladeless wind turbines is expected to pick up speed in Western Europe owing to presence of favourable environmental conditions and availability of advanced technology. Asia Pacific is estimated to flourish due to increasing government initiatives for promoting wind energy.

In wind energy conversion, power generation is proportional to the swept area of the wind turbine and Vortex currently sweeps up as much as 30 % of the working area compared to a conventional 3-blades-based wind turbine of identical height. As a result, generally speaking, Vortex wind power generation technique is less power efficient than regular horizontal-axis wind turbines. Though, bladeless wind turbines being at a nascent stage, are less efficient in the conversion of captured wind power into electrical energy, which is limiting their implementation on a large scale but design and development of future bladeless wind turbines using advanced technology and enhanced materials is likely to boost the demand for these turbines in the forthcoming years.