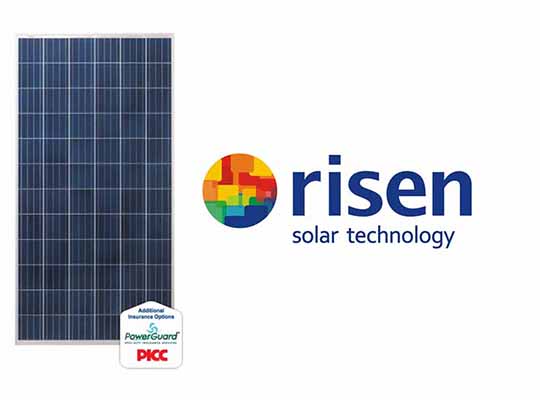 In response to ongoing demand for carbon footprint reduction, from both customers and governments alike, Risen Energy has developed an alternate framing system to mitigate the inherent carbon footprint of aluminium. By using a mission optimised, coated alloyed steel, complete with a significant reduction in energy consumption during such steel production, Risen Energy has delivered a formidable result for both resilience and durability within this matchless product.

China’s State Council recently released the Working Guidance for Carbon Dioxide Peaking and Carbon Neutrality in Full and Faithful Implementation of the New Development Philosophy. The guidance states that China plans to increase the share of non-fossil fuels in the primary energy consumption mix to approximately 25 per cent by 2030, by which time its total installed capacity of wind and solar power is expected to exceed 1200GW in addition to reaffirming the goal of carbon peak and carbon neutrality.

At COP26, 136 countries made net-zero pledges; 90% of the global economy is covered by net-zero commitments. Now, with more than 35 world leaders signing up to the Breakthrough Agenda, governments across the world will help dramatically scale and speed up the race to zero emissions and deliver the promise of the Paris Agreement.

The carbon neutrality mandate puts the onus on the photovoltaic sector to shift to raw materials with lower carbon emission and less energy consumption. Steel processing far outperforms the electrolytic aluminium equivalent in terms of carbon emission and energy consumption reduction; 13,500kWh of thermal power is required to produce one tonne of aluminium, equivalent to 11.2 tonnes of carbon dioxide (CO2) whilst similarly, 4,500kWh of power and corresponding 1.8 tonnes CO2 is needed to produce one tonne of steel.

“Whatever your belief” expounded Mr. Sun, president of Risen Energy Co., Ltd. “environmental pollution and carbon dioxide emissions affect us all. It is simply not good enough for us to proclaim that we are making an impact of reduction of these elements by providing and using solar PV modules, we must do more. Moving to this uniquely constructed module is a step in the right direction.”

Simply swapping out aluminium for steel of any type is not a simple exercise. Corrosion resistance, strength and cosmetic issues all need to be considered and evaluated. The high strength alloy steel frame looks, for all practical purposes, the same as the one made of aluminium, yet it out performs in strength, corrosion and weather resistance because of the use of corrosion-resistant zinc-aluminium-magnesium coating as well as Risen Energy’s unique surface treatment technology. After more than a year of efforts in reliability testing and design optimization, Risen Energy’s fully upgraded Titan series of modules has received IEC certification from the independent testing and certification organization TÜV SÜD, demonstrating that the upgraded series fully meets the needs of various application scenarios of PV power generating systems.

The application of the high strength alloy steel frame is a major step in Risen Energy’s ongoing efforts to facilitate industry-grade optimization and transformation in response to industry trends and the country’s goal of achieving carbon neutrality. For customers and end users alike, the performance of the company’s exclusive patented high strength alloy steel frame stands out from the rest.

An Initiative by Oorjan to Train and Connect Solar Energy

Sungrow Brings Out the All New 75 kW String Inverter