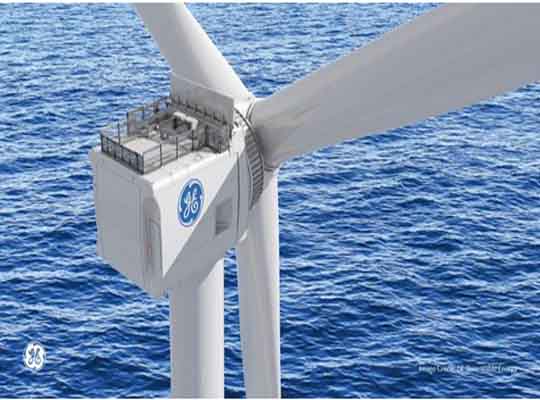 GE Renewable Energy announced for finalizing supply & service contracts (subject to final notice to proceed) with Ocean Wind, the Ørsted Project located 15 miles off the coast of southern New Jersey. Ocean will feature GE’s Haliade-X 12 MW wind turbine with an option to optimise the 13 MW variant. The agreements will include a five-year Service & Warranty agreement for providing operational support for the wind turbines with the Ørsted Operational & Maintenance team.

The Haliade-X 13 MW uses the same design as the 12 MW, meaning the size and dimensions of the turbines are identical. However, GE Renewable Energy engineers have optimized the turbine by making some enhancements in the cooling system and related electrical equipment so that it can produce enhanced power using the same design and size. As a result, one spin of the Haliade-X 13 MW can generate enough electricity to power, equivalent for a US household in a day.

John Lavelle, President & CEO, Offshore Wind at GE Renewable Energy, said, “We appreciate the continued confidence that Ørsted has shown in our Haliade-X turbine. We are excited to be a part of New Jersey’s inaugural offshore wind project and look forward to a long partnership with both Ørsted and the Garden State. The New Jersey Wind Port will be a great resource for the offshore wind industry, including GE Renewable Energy, to use in maximizing the environmental and economic development benefits that offshore wind can bring to the state and the nation. We look forward to tapping into New Jersey’s qualified workforce to help install and service these state-of-the art turbines in a safe and efficient manner.”

“For decades, Ørsted has worked closely with suppliers to bring down the cost of electricity from offshore wind by introducing new and innovative technologies on our projects,” said Martin Neubert, Executive Vice President and CEO of Ørsted Offshore. “The ever-increasing capacity of wind turbines has been fundamental to making offshore wind energy competitive with electricity from fossil fuel generation. We look forward to working with GE on deploying the new turbine on our Mid-Atlantic projects.”

“Partnering with GE to supply our largest U.S. project speaks to the confidence we have in the Haliade-X turbine’s revolutionary technology,” said David Hardy, CEO Ørsted Offshore North America. “Bringing GE’s renewable energy expertise to the Garden State bodes well for the future of the industry and for New Jersey.”

The Ocean Wind Offshore Wind Farm is located over 15 miles off the coast of southern New Jersey and will be capable of powering up to the equivalent of half a million New Jersey homes each year once completed.

The Haliade-X blade will continue to be tested and optimized at the Massachusetts Clean Energy Center Wind Technology Testing Center in Boston and at other sites around the country and around the world. In addition, the Haliade-X prototype unit in the Netherlands, which set a world record in January 2020 by being the first wind turbine to produce 288 MWh in one day, will be operating at 13 MW in the coming months as part of its ongoing testing process. The Haliade-X 12 and 13 MW configurations have both received type certificates from DNV-GL, the world’s largest independent certification body, providing independent verification that the new turbines will operate safely, reliably and according to design specifications.

Renewable Energy Generation has Become One of the Most Important Aspects in Terms of...