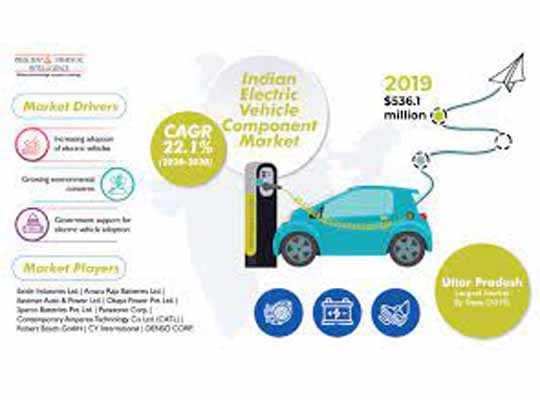 NEW YORK, March 25, 2021 /PRNewswire/ — The Indian electric vehicle component market is growing on account of the declining prices of the components and increasing adoption of EVs, driven by the rising environmental concerns and strong government support. Subsequently, the industry, which was worth $536.1 million in 2019, is projected to expand at a robust 22.1% CAGR during 2020–2030, according to the market research study published by P&S Intelligence. Battery cells and packs, battery management systems (BMS), electric motors, thermal management systems, DC–DC converters, and charging kits are just some of the components that go into an EV.

The market, on the basis of vehicle type, is divided into three-wheeler, two-wheeler, commercial vehicle, and passenger car. Among these, the three-wheeler category held the largest share in the Indian electric vehicle component market in 2019, on account of the widespread usage of e-rickshaws in the country. As these automobiles cover more than 100 km every day, the demand for replacement components for these is quite high.

The Indian electric vehicle component market for passenger cars is categorized into motor, battery pack, electric vehicle supply equipment (EVSE), controller, thermal management system, high-voltage cable, vehicle interface control module (VCIM), power distribution module (PDM), and DC–DC converter. Throughout the forecast period, the industry would be dominated by the battery pack category, as it is the most expensive electric car component. With the battery pack cost predicted to reduce to $160 per kilowatt-hour (kWh) by 2030 from $230 per kWh in 2019, the sales of battery packs would rise.

A key trend in the industry is the increasing sales of EVs with higher battery capacities. As two-wheelers and e-rickshaws have dominated the Indian EV market till now, the demand for lower-capacity battery packs had been higher. But now, with the rising sales of electric cars, commercial vehicles, and longer-range scooters and motorcycles, the demand for higher-capacity battery packs is surging in the nation. For long-distance operation of EVs, it is important that the need for recharging the batteries is as less as possible, which is why they need batteries with a higher capacity.

The most significant driver for the Indian electric vehicle component market is the rising adoption of EVs. In 2019, 2,000 electric passenger cars, 32.4 thousand electric two-wheelers, and 447.7 thousand electric three-wheelers were sold in the country, thus creating a high demand for original equipment manufacturer (OEM) and aftermarket components. As the transportation industry is responsible for around 40% of India’s greenhouse gas (GHG) emissions, the government is offering subsidies, tax rebates, and other incentives to those producing and purchasing EVs.

Similarly, the declining prices of the components are also leading to the increasing demand for them in the nation. For instance, the cost of the battery is projected to decrease by up to 30% between 2018 and 2025, and with batteries being the reason EVs are costly, their declining prices would make such automobiles affordable for the masses. In the same vein, during the said period, controllers, motors, thermal management systems, EVSE, VCIMs, PDMs, DC–DC converters, and high-voltage cables would become 23%, 24%, 9%, 60%, 8.6%, 6.5%,21%, and 8.5% cheaper, respectively.

The Indian electric vehicle component market is divided into Uttar Pradesh, Madhya Pradesh, West Bengal, Delhi, Bihar, Rajasthan, Chhattisgarh, Haryana, Punjab, Uttarakhand, Assam, Jharkhand, Gujarat, Tripura, Tamil Nadu, Maharashtra, Kerala, Andhra Pradesh, Telangana, Karnataka, and Rest of India, based on state. Among these, the largest share in the industry was held by Uttar Pradesh in 2019, as it is the most-populated state and the largest market for three-wheelers and two-wheelers in the nation. The forecast period scenario in different vehicle segments would be different across the states.

Therefore, with the increasing production and sale of EVs, the demand for OEM and aftermarket components, respectively, will continue increasing in India.