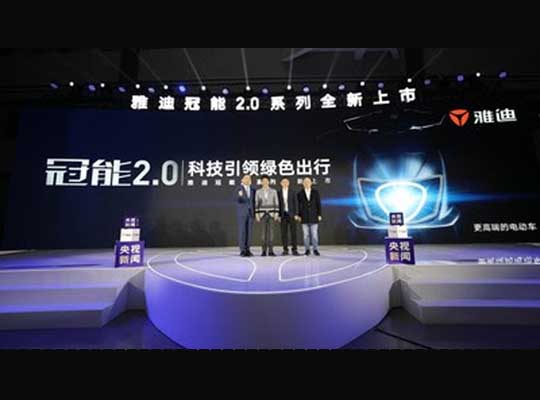 At the event themed “High Technology Leads Green Travel”, Yadea unveiled the new models of the Champion 2.0 series, equipped with the world-leading TTFAR 8 extended range system. With the slogan “One charge, double the mileage”, it attracted significant attention and widespread recognition from the industry and the flagship smart scooter series, the Yadea Smart 2.0 series, was also showcased at the event.

“As the leader of e-scooter industry, Yadea has independently developed a number of core technologies to empower our products and unleash a real technological revolution in e-mobility,” said Zhou Chaoyang, vice president of Yadea

“As we move forward, Yadea will continue to foster new technology and products so that they propel the industry forwards. In doing so, we’ll create a new global era that is continuously enhanced by Chinese innovation,” Zhou added.

The Champion 2.0 series boasts breakthroughs in power and mileage with a lifespan of three times that of ordinary batteries and a maximum range of up to 140 kilometers. This not only realizes long trips but can be charged very quickly. Thanks to Yadea’s cutting-edge fast-charging technology, a one-hour charge fills 80 percent of the battery. Besides the Champion 2.0 series, Yadea’s new Smart 2.0 series has also been warmly received by fans. Connecting with the designated app, which creates a comprehensive statistical analysis of the scooter while interacting with the user, the Smart series paves the way for the future intelligent development of the industry.

To realize green travel, Yadea has embarked on a mission to bring its e-mobility solutions to users around the world with a sales network spanning 83 countries, serving 50 million users. As the largest producer of two-wheel e-vehicles, Yadea draws on its eight production bases across the world to ensure reliable, large-scale manufacturing. Moreover, it has a wide range of global partners, including LuXshare, BMW, CATL, Beckers, and Powerland, to bring world-leading technology together and create a smart future for all.

Innovative and representative of Chinese smart manufacturing around the world, Yadea was a pioneer in the two-wheel e-vehicle industry. Since 2007, export sales of Yadea have topped the list in China’s two-wheel e-vehicle industry. In line with its mission to bring users exceptional e-scooter experiences and help move green travel one step forward, Yadea is committed to nurturing a new generation of technologies, to innovate the industry and expand possibilities.