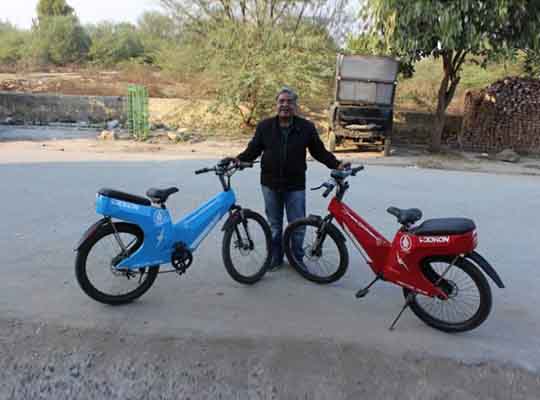 In recent months, high crude oil prices have been a source of discontent for consumers the world over and its impact has been shared by the Indian consumers as well. Needless to say that the impact on the Indian consumers had been more pronounced with a higher tax on oil coupled with a lower per capita income and the fact that a substantial population of India works in the unorganised sector. The problem has been compounded by the fact that in the post –covid era unemployment rates are high and the income has gone down substantially. All this put together has the Indian consumer caught in the crossfire. Between the devil and the deep blue sea.

As most would rightly predict a doom in the coming days with oil becoming a preserve only of the elite. To me it seems like a silver lining around the dark cloud, a light at the end of the tunnel as my recent experience since the launch of the Voltron Electric Cycle propels me to believe. The acceptance of the Voltron cycle with such open arms and with so much longing by the consumer clearly demonstrates their consciousness and desire for a cleaner and greener ecosystem.

The Covid era forced us to revisit was has been promulgate by a number of learned philosophers, theologiest and gurus – “We eat to live. We don’t live to eat “.The fact that happiness is about good health, contentment and peace of mind in what we have and that wants and desires are but a never ending black hole which will eventually engulf us eventually.

Destiny works in mysterious ways and nature finds its own ways to cure the ills which plagues it. The fact that the earth is becoming hotter as a result to greenhouse emission and its impact on the climate and weather all over the world is common knowledge. The fact that countries all over the world have come together to fight it is well documented. However the owns to change and to bring about change rest eventually with the people , for it is the people who constitute the nation and only a change of their mind set can lead to a global impact .

The rising crude prices has provided an impetus to the consumer to shift to a greener way of commuting by adopting electric vehicles and that is where the silver lining is , that is where the light is at the end of the tunnel. It will not be out of place to say, what government subsidies could not achieve, the rising crude prices appear to be achieving. As is rightly said, hit where it hurts the most for maximum impact, and yes the crude has hit where it hurts the most, the consumers pocket, his disposable income. I say this since I have seen the demand for the Voltron Electric cycle from people of all walks of life from medical representative to insurance agents , from factory owners who have expressed their desire to switch to electric vehicles  instead of a scooty , from people commuting to office 25 to 30 km away , from parents who choose to go electric rather than giving their children a scooty to commute on , from bakers and sales people for delivery of items , from the rural hinterland for commuting between nearby villages and to the nearby cities , right from Lakshadweep to Ladakh and from Nagaland to Kutch.

To my mind this appears to be a silent but steady social revolution which is unleashing itself and causing a ripple effect, which will without getting noticed usher into an era which we desire and dream of. The chrysalis which the entire world has been waiting for and trying to enforce but has for long not been able to accomplish.