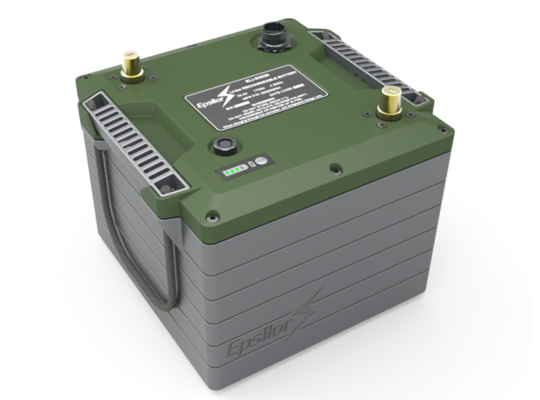 BEIT SHEMESH, Israel – The COMBATT lithium-ion 6T NATO-standard batteries produced by Epsilor, a globally recognized manufacturer of smart batteries and chargers, have been integrated into the “Jaguar” autonomous ground vehicle (AGV), which was recently unveiled by the Israeli Defense Forces (IDF).

The Jaguar military robot, which was developed by IAI’s ELTA Systems Division, will be deployed around the Gaza border, and subsequently also near other borders and in the IDF’s infantry and special units. Each such military autonomous vehicle is equipped with several 6T batteries providing with it over 16kWh of energy.

The Jaguar is a heavy-duty, highly maneuverable combat and combat support AGV. As such, it requires an extremely high energy capacity on board to support traction in complex terrain, as well as a weapon station, communications and sensors which it carries onboard.

Epsilor COMBATT 6T batteries, which provide the highest energy density in the 6T category, are an ideal power source for AGVs, which have tight weight and volume constraints, and are required to maneuver quickly in rough terrain.

“The potential of tactical unmanned robotic systems is immense,” said Felix Frisch, Epsilor’s VP Marketing and Sales. “Ground tactical robots have passed the early development stages and are currently being evaluated in the field by many leading forces, such as in the US, France, UK, South Korea and Israel.”

According to Frisch, Epsilor has received additional orders for its vehicle batteries from other providers of autonomous vehicles and tactical robots operating in the civil and the defense sectors.

“In Israel alone, where there are more than 1,000 km of borders and security fences, there is a real need for the deployment of such systems, and Epsilor’s batteries offer high technical capabilities, performance in all weather conditions and robust design,” Frisch added.

Epsilor’s 6T batteries have been developed to meet the IDF’s special requirements and are already in use in the IDF’s tanks and armored vehicles. The IDF held a year-long field test during which the battery performed in different climate and field conditions (desert, mountains, rocky areas, etc.).

Since their introduction, COMBATT 6T batteries have been also selected by more than 10 international customers on four continents to power MBTs, AFVs, towed and self-propelled Howitzers, and tactical energy banks.

IESW 2020 to Pave Ways in Accelerating the Manufacturing and Adoption of Advanced Energy...