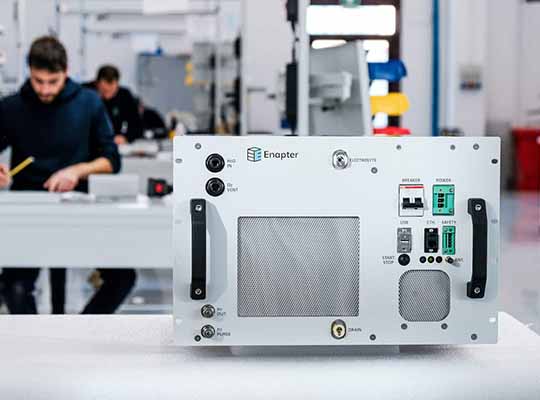 SAERBECK, Germany – The cleantech company Enapter celebrated the groundbreaking of its mass-production facility for green hydrogen-producing electrolysers. Its 82,000 square metre Enapter Campus will be built in the climate community of Saerbeck in North Rhine-Westphalia, Germany, and powered entirely with locally-produced renewable energy. Enapter is pursuing an initial goal of multiplying its production capacity to 10,000 electrolysers a month to satisfy the rapidly-growing demand for low-cost hydrogen production solutions.

“To massively reduce the costs for green hydrogen production and reach global climate goals, we now need to scale existing technologies at speed,” said Enapter CEO Sebastian-Justus Schmidt in his opening speech at the festive groundbreaking. “Our entire DNA is focused on urgency in research, development and market entry: The Campus is our climate contribution under the motto ‘Acting, not talking’. Scaled production of modular, compact AEM Electrolysers for projects of any size will make a substantial contribution to tackling the climate crisis.”

Based on current plans, the Enapter Campus will cost around €105 Million. Construction partner Goldbeck will build at an ambitious tempo so that production can begin incrementally in the fourth quarter of 2022. First customer deliveries from mass-production are envisaged to start in 2023. The development is currently expected to create around 300 jobs in Saerbeck.

The automated mass-production of electrolysers will enable Enapter to decrease the cost of the devices and thus quickly make green hydrogen competitive with fossil fuels. Development of the machinery necessary for mass production has been supported by the North Rhine-Westphalia Ministry of Economic Affairs, Innovation, Digitalisation and Energy with around €9.36 million.

Enapter already provides more than 70 integrators and project developers in 40 countries with its patented AEM (Anion Exchange Membrane) Electrolysers, which are standardised but flexible in implementation for many applications. From 2022, Enapter will offer the first megawatt-scale AEM Electrolyser – the containerised AEM Multicore – featuring 420 of its AEM electrolysis stacks.

“Enapter’s dynamic approach to fighting global warming has impressed us greatly,” said Jan-Hendrik Goldbeck, CEO of the family-led construction firm. “We are both proud and delighted to work alongside them in building the Enapter Campus and thus contribute to the rapid scaling of their electrolyser production.”